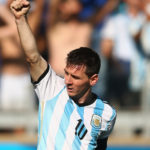 Recaps & Highlights Argentina vs. Iran Iran gave Argentina all they can handle, and held Nigeria to a 0-0 draw. I put them in the category with Australia as teams who lost but can go home with their heads held high. Argentina was saved by a late Messi goal and was fortunate that Iran didn’t score on one … Continued

Recaps With the exception of the Argentina vs Bosnia-Hervogina match, I didn’t see much of the days games… Switzerland vs Ecuador Ecuador with the early lead, but a FANTASTIC late game run and finish in extra time gave Switzerland the victory. That late game run should be viewed by every single youth player on the planet … Continued