I wish the cure for this fever was as simple as more cowbell. Alas, I am plagued by… TECHNOLOGY.

Why? [Ahem…] WHY?!?! Do they have to keep improving technology? Why does it have to be cooler, faster, smaller, and SHINIER!

Every time I upgrade my computer, I say to myself “This is the last upgrade for at least a year”. And each time I prove myself a big fat liar. Late last year when I purchased 8GB of RAM to max out my computer late last year I was thinking it would last me through the year, and then *maybe* I *might* look to upgrade early in 2009.

I originally had 3 250GB drives in this machine. One of the drives was for OS and programs, another for storage and the third for a scratch disk. Over time, the storage disk started filling up so I replaced it with a newer Samsung 320GB that I removed from my old ghetto tivo before I sold it. The Samsung has decent speed, low power and it’s quiet.

Well, each month that passed my hard drives (all three of them) kept getting more and more filled up. Mind you, I don’t mean “Full” like most normal people who don’t consider their drive full until Windows starts telling them they have no room left. I’ve seen those people using 159 out of 160GB, and say “But WHY is Windows so slow, I have plenty of room, there’s over a GIGABYTE left?!?!” Then they clear out a few hundred MBs worth of cookies and temp files only to repeat the process a few days later.

No my friends, for me the tipping point is about 20% of the drive being full. Past that point you start to notice a decrease in performance. Why 20%? Think of it like a vinyl record… The outer rim spins significantly faster than the inner portions. As you fill up the drive (it fills up outside in) you are putting more and more information on the inner, slower tracks. In addition, you have to add in the time it takes for the heads to move from the inner tracks to the outer tracks. It may not seem like much, but it matters. And to me, every ounce of performance is important.

Around about that time some new drives from Western Digital came out boasting 320GB platters. That means fast and low power. My two favorite things :) What wasn’t a favorite was the price. I think they came in about $130 per drive. So… I waited. And finally my patience was rewarded with a $95 sale price. I bought two. My thinkging was to replace the storage and scratch disks, and move the 320GB that was for storage as my OS/programs disk. Still with me?

OK, so here is a round of simple and quick benchmarks with HDTach I performed before and after the swapping. So I could see just how much of an improvement I was looking at. I must say I was expecting a boost, but I was really floored by the performance of the new WD drives, and how they compared to my old ones.

[Note: This wasn’t a particularly scientific comparison, it only took me a few minutes to run the benches. I only ran them twice on each drive, the results were about the same so I didn’t average them out like some people do on reviews. And I only ran this one type of test. Frankly, I think this gets the point across and if you want *really* in-depth numbers, there are plenty of other places to give you those numbers.]

First up is the old C: drive which held Windows and programs. The old drive was a 250GB Western Digital WD2500KS, and it was replaced by a 320GB Samsung HD321KJ. As you can see the average transfer rate increased from ~52MB/s to ~64MB/s, a modest increase, but an increase nonetheless. The peak transfer increased from a little over 60MB/s to almost 85MB/s. Much better. Click the image to see a larger version.

Next is my storage drive. The old drive is the Samsung that I am now using as my C: drive. Here the difference is pretty staggering. Average transfer rate increased from ~65MB/s to ~95MB/s, an increase of over 30MB/s and 50% more than the older drive!!! The peak transfer increased from a little over about ~85MB/s to almost ~120MB/s. Awesome. Click the image to see a larger version.

And last but not least, my working/scratch drive. This comparison wasn’t even fair. Average transfer rate is almost double, so is the peak transfer rate. Click the image to see a larger version. 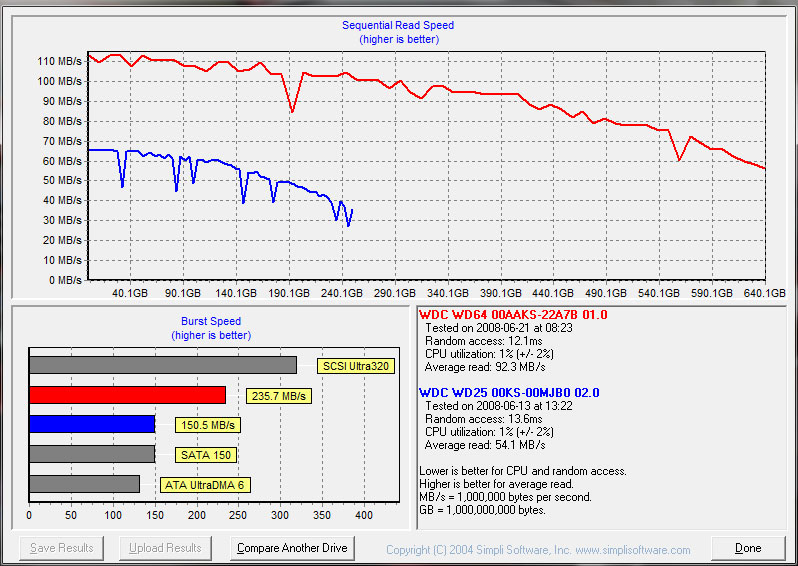 Next topic I think will be my daily struggle to avoid buying a Penryn, and whether or not to wait for the new Nehalem chips from Intel that are due late this year…

One response to “I have a sickness”