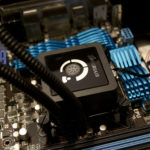 So it’s been awhile since I’ve last updated my computer specs. It has actually been quite a while since I’ve updated, but I’ve also been so busy I didn’t get to update on my last build. Last time I updated my rig was rocking a Q9650 Intel Quad Core running at just over 4Ghz. About … Continued

That something is called…. Nehalem. Yeah that’s right, Intel’s new processor, codenamed “Nehalem”, is coming out this month. The Non-Disclosure Agreement (NDA) has apparently ended and there is a slew of reviews across the internetwebs discussing the new chip. I skimmed or even read several of them trying to get the lowdown on this new … Continued