Just a few neat things. First of all “The Man With The Hat is Back” as apparently filming of the new Indiana Jones movie has started. Here is “old” Harrison Ford in the famous getup.

Some people build little sailboats and stuff them into bottles. This guy builds German Battleships that he can stuff himself into.

The 2007 Key Art Awards rewards the best movie posters of the year. Check out the “Best of 2007” from Movie Poster Addict. 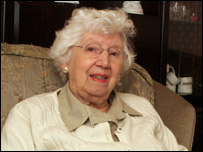 Just because your 80 years old doesn’t mean you can’t get deported. This poor old lady came from America when she was 2 years old and has lived in Scotland all her life. She didn’t know she wasn’t a citizen until they wouldn’t let her back in the country after a trip to Australia.

My question is… if you went to the consulate to get your American passport, wouldn’t that be a clue?