It’s time to put your big boy pants on. From now on it’s win or go home.

There are two games every day during the Round of 16 which starts Saturday June 28 and continues through Tuesday July 1st. 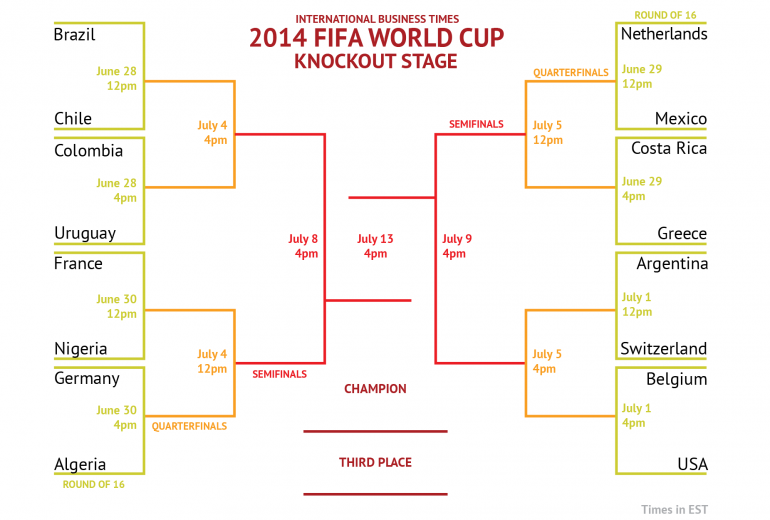 There are a couple of teams rolling into the second round. Colombia, Germany, Netherlands, and France all cruised through the first round and have been firing on all cylinders. All except for the Netherlands are comprised mostly of really young players. I think as the tournament wears on and fitness becomes an issue these younger teams will still have an advantage. Whether it’s enough to overcome a more experienced team, we shall see. I’ll tentatively put Chile in this group as well although they were a little ruffled by the Machine known as the Netherlands in the last game of the first round.

Ladies, if you’re looking for pics of hot Goalies, you’re out of luck. No team in recent memory (except Brazil) has won the tournament without a standout goalie. Most of the time, those teams go out real early. Goalies on a roll right now are USA’s Howard, Colombia’s Ospina, and Mexico’s Ochoa. These guys have been tested and stood up to the challenge.

Who Should and Shouldn’t be here

Greece. How in the heck did you sneak through? Nigeria and Uruguay are primed for early exits.

Chile is playing great soccer, but unfortunately for them have an early match against Brazil that will probably end their run.

Costa Rica surprised everyone who isn’t from CONCACAF. They’ve got a relatively easy match against Greece and should make history by going to the next round.

Mexico almost didn’t make it to this World Cup if not for a victory by USA over Panama on the last day of qualifying. They’ve since turned the team around, literally and figuratively. Their playmakers are making plays and their workmen are working. Standout goalie Ochoa has had a BEAST of tournament especially in the match against Brazil.

This is my co-match of the day because I think this will be one of the top games of the tournament no matter who wins. Brazil has played well, but not great so far in this tourney. Their defense has been exposed on several occasions, especially the two center halves and the goalie. No one has maintained possession of the ball for long enough to give them serious problems except for perhaps Mexico and we saw how that went. Offensively they are still a juggernaut. With the exception of Mexico, all teams playing them have parked the bus in front of goal (with good reason) and Brazil has found a way through each time.

Chile has played very well so far, their offense has shown brightly and been very firm defensively. The best defense against Brazil is a good offense, and Chile is built to do just that. They can keep up possession probably as good or better than anyone left in the final 16 and consistent ball control WILL eventually show cracks in Brazil’s defense. But the key is going to be to hold Brazil to a 0-0 score as long as possible. If they go down to an early goal with the crowd behind them it will be very hard to contain Brazil. If a team opens up offensively they could leave holes in the defense that Brazil will be all too happy to exploit.

One thing that Brazil isn’t given enough credit for is pressuring the ball immediately after losing it. They win the ball back SO OFTEN with that pressure and they cause other teams to panic so much that even if they don’t have pressure they hoof it out anywhere. To beat Brazil you have to be a little patient and know your surroundings. If you can keep that possession you have a chance to test their defense.

I say this game is even. I give 50-50 odds on either team winning. Most people probably have Brazil going through, but I would totally not be surprised to see Chile advance.

My co-match of the day because COLOMBIA!!!!!!

Uruguay is coming off of 2 huge wins WITH Suarez on the field after a lackluster opening game against Costa Rica WITHOUT Suarez. Their challenge today is to find a way past the distraction of a media circus that Suarez’ bite has caused as well as find a way to play well without him in the lineup. Uruguay still has lots of talent so we shall see.

Colombia on the other hand is coming in rolling like a truck. They went 3-0 in the opening round although they didn’t face the same quality of competition that Uruguay did (a tough Costa Rican team, fading but tough England & Italy). However, in a tournament like this, rhythm is everything and Colombia sure does have it. The forwards are clicking with even Jackson Martinez, who hadn’t scored in over 5 years for the national team, finally finding his form and notching 2 in the last game. James “Don’t call me James” Rodriguez has been one of the top players of the tournament and even youngster Quintero has shown well. Yepes leads a staunch defense with an excellent goalie behind them in Ospina.

I give the edge to Colombia because 1) that’s my heritage 2) they are playing brilliant soccer right now 3) they will be playing in front of pretty much a home crowd 4) the Suarez Incident leaves a hole in Uruguay’s offense as well as maybe gets in their head a little.

Match of the day. Netherlands has pretty well romped through the tournament with the exception of the Chile match. Mexico held a very good Brazil to 0-0 and is playing very well also. This is a game between two very good teams and should be fun to watch.

Like most teams in this World Cup Netherlands has played their best when defending and breaking on the counter attack. Robben looks like he’s a 20 year old running around and guys like Van Persie are in form as well. They will be tough to beat not just today, but throughout the tournament.

Mexico barely squeaked into this World Cup and here they are, playing well and into the second round. #YoureWelcomeMexico. They finally got their playmakers in Dos Santos and Hernandez to actually play well when wearing their national colors. They can go as far as anyone else in this tournament but happen to have run into the Holland Train in the first knockout game.

I’m rooting for Mexico in this match but I think Netherlands might just be too much for them.

This is likely the snoozer in the Round of 16. Greece played like dirt until they finally woke up in the 3rd game of the first round and managed to squeak past Ivory Coast for passage into the next round. Other than parking the bus and hoping for a goal off of a set piece or counter attack I’m not sure how Greece wins this one.

Costa Rica started out poorly in the first half of their first game against Uruguay but has played excellently ever since. They’ve got composure in defense and skill and speed on offense. They are one of the surprises of the World Cup, but anyone in CONCACAF will tell you how tough a team they are to play.

Rooting for and expecting Costa Rica to cruise in this one.

Match of the day. If I get my wish, this will be some serious end-to-end action. Nigeria has had an up & down tourney but are always dangerous offensively. And France has shown they LOVE to counter attack. They’ve got some of the nicest goals from fast breaks in this tournament. Not to mention their defense has been outstanding, probably the best in the tournament so far.

I’m rooting for and expecting a victory by France, but if Nigeria gets an early goal… well.

The little I’ve seen from Algeria is pretty good, but Germany is quite frankly rolling. Plus, they have better beer.

The weakness, which has yet to be exploited, is that Germany plays with 4 center backs on defense. It’s only a matter of time before someone figures out they can get behind them on the wings. But first they have to stop picking the ball out of their own net.

Argentina hasn’t played as well as you’d think from the scores they’ve posted. They are still a good team though and Messi at any moment can come through with some magic. Di Maria has played well, mostly due to the extra space he’s given by defenders watching Messi so closely. But watch out because as Iran showed, they can be countered.

Switzerland was a dark horse for some, but they got absolutely stomped by France in the first round. If Argentina gets an early goal I’m not sure they can recover.

The US still has not found their stride. The loss of Altidore had a bigger impact than I think anyone expected. Against a very solid, if unspectacular, Belgium squad this could be a very good matchup for the US. This is the first match where they have a chance to own the ball for a majority of the match since they don’t press as well, press as high, or hold the ball as well as anyone else in the Group Of Death.

I would still like to see the US come out in a 442 with 2 real strikers. Dempsey & Johanson or Dempsey & Wondolowski. I think part of their problems maintaining the ball is there is no one for the target forward to lay the ball off to or to win the second ball. Dempsey did a great job of this playing off of Altidore, but now that Dempsey is playing Altidore’s role (but not as well) there is no one for him to lay off to. Bradley/Jones have usually been too far away.

Rooting for, and kinda expecting the USA to advance.