Sitepoint recently held a survey about PHP frameworks, asking readers which was their favorite and why.

The end of the year is upon us. Lots has changed in the PHP world in the past 365 days, and the PHP framework scene is more densely populated than ever. Everyone and their dog seems to have an idea of what a good framework should look like, but in the end, do we even know which frameworks actually end up being used in production projects? How many go beyond the stage of thousands of people just doing a demo app in them?

Looking back on my coding career, I started out writing everything custom. Every line of everything was thought out, written, and tested by a one-man band. However, I quickly reached a point where just keeping up with the Joneses in regards to features and (most importantly) security was like climbing up an increasingly steep hill. So I started looking for tools to help me write faster. WordPress was the first “framework” I used, although many don’t consider it to be a true framework. It allowed me to focus on creating a nice design without worrying about whether someone could inject malicious code in a textbox or building a tool to upload images.

I picked up Laravel probably mid-2013 after quite a bit of research and came to the same conclusions as many of the comments in Sitepoint’s article. It’s nice & easy to learn, has a decent amount of built-in stuff, and has a good developer community. Symfony gives you the most flexibility but at a cost of some performance. Phalcon is super-fast but you can’t peak under the hood. CodeIgniter had a lot of the same benefits but is no longer being developed.

For further comments/opinions, check the original article over at Sitepoint. 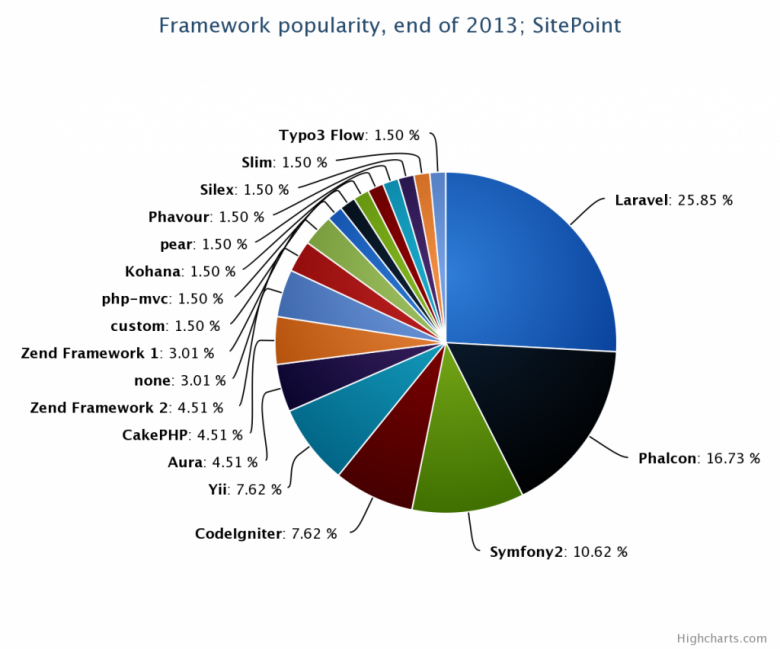