In some respects it was better than I’d hoped. In some it was about as I expected. And in others it was far worse than I expected.

In a shocker to me, Jaime Moreno was not in the starting lineup. No one has seemed to make a big deal out of it, so maybe I’ve missed something in the press about an injury or something. Also missing was Crayton, who was replaced by Josh Wicks(!) instead of Milos Kocic.

Chris Pontius started in Moreno’s place and did very, very, very well. He looked composed, efficient, skillful, and has the physical tools (size, speed) to succeed. He scored a goal (nominated for Goal of the Week) that was very well taken. He cut in from the left side of the penalty box towards the center of the field, and when no one stepped up to challenge him he took a good look at goal and calmly measured the ball to the far post, curving around the goalkeeper. I think he has earned a starting position. During most of the preseason, he was at the wing position but I don’t know if there is room for him there just now.

Rodney Wallace did a very nice job as well. He started out a little tentative, but gradually grew in confidence and agression (in a good way) as the game went on. He is supremely athletic and covered the entire flank very well, both offensively and defensively. It has been a long time since we’ve had somebody that fast play on the wing, and I must say the speed has been missing for a long time and is very welcome indeed. He reminds me a little bit of Marvell Wynne in that he’s very fast and quite raw, although Wallace has much better skill on the ball (although not as fast).

The defense as a whole, did very nicely as well. Janicki was very solid in the center with Jakovic and Namoff on the right and left side respectively. Olsen and Simms in front of them and McTavish and Wallace providing coverage on the wings gave them a lot of help.

Benny Olsen. What a return. I know it wasn’t quite 90mins but he definitely put his mark on the game. His savvy is absolutely invaluable. I don’t think it’s completely unexpected that we gave up both goals with him off of the field. A “midfield general” if ever there was one, he definitely deserves the captain’s armband. If he can give us significant minutes this year, maybe average about 60-70 mins/game,  I think that is enough to tip the balance in our favor.

About as I expected:

Christian Gomez is clearly not 90mins ready. Not that he ever really was… But even less so now. It is also more apparent, that his tendency to disappear for stretches at a time is just as bad if not worse than it was when he was here last time. We got about 20mins total of performance from him. I can’t say it is his fault, per se, but the little bits where he was involved got us some continued possession and also resulted in a PK in our favor. We looked dangerous with him touching the ball. The problem is it just wasn’t in enough quantities. Can we survive with Gomez influencing our game for 20-30mins per game?

Devon McTavish on the flank is good for the defense, awful for the offense. As soon as I saw him out there I knew what we were going to get out of that position. It’s not that he’s “bad” out there, it’s just that he doesn’t contribute enough. And in order to de-congest the middle of the field where our stars (Moreno, Emelio, Gomez) are we NEED to have a legitimate threat on both flanks. The center of the field in a defensive midfield role might be his best spot. Not as a lone DM, but maybe as a complement.

I almost put Josh Wicks in the “better than I expected” group, but thought better of it. It’s too early in the season to put someone in that category just because they didn’t have a catostrophic event. He inspired absolutely no confidence. He misjudged a few balls that were crossed in. He called off a defender who was in a clear position to clear the ball and then proceeded to whiff on the ball. And his Thornton-esque attempt to bodyblock Donovan into the goal after his PK was childish, and if he had connected would *surely* have been a red card (unlike Thornton on Moreno a few years ago). I get the same queasy feeling I used to when Wells was in goal. Frankly, I can’t believe this guy was better than Kocic. [Interesting to note that Soehn blew up at Goff for asking where Crayton was. Make of that what you will…]

Worse than I expected:

Lucigol is now just “Lucy”. Luciano Emelio was purely non-existent except for, I think, maybe one shot. He doesn’t look fat and out of shape like he did last year, but there is clearly something missing. Just like Gomez, I’m not sure this is entirely his fault. He’s very dependant on service. We’ll have to keep an eye on this. Can we actually have two players who barely do anything all game but chip in a goal here and there? I dunno.

What others are saying:

I leave you all with this thought for the day from xkcd.com 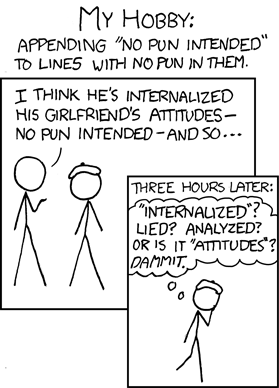